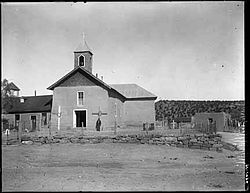 Villanueva, an old Spanish colonial village located along the Pecos river in New Mexico’s San Miguel County, was originally called La Cuesta (Spanish for hill or slope) because the village sits on top of a steeply sloping hill or cuesta in the Pecos Valley. Soon after the Spanish Government approved the San Miguel del Vado Land Grant in 1794, settlements were established along the banks of the Pecos River, such as Bernal, El Pueblo, Entrnosa, Guzano, La Cuesta, Las Mulas, Puertecito, San Jose, San Miguel. In 1890, the community was renamed to Villanueva, for a prominent local family. 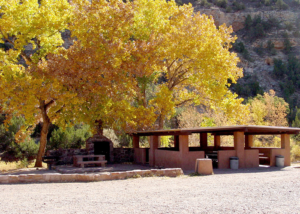 East of Villanueva is Villanueva State Park, a colorful canyon cut by the Pecos River. The park features red and yellow sandstone cliffs, cottonwood trees, and other native plants. The park elevation is 5,600 feet (1,700 m) above sea level. The park is located less than 2 miles from the Villanueva General Store, and 35 miles (56 km) southwest of the town of Las Vegas, New Mexico. You can learn more about the park at www.emnrd.state.nm.us/SPD/villanuevastatepark.html and on TripAdvisor.